The workshop on “Key Technological Issues in Construction and Exploitation of 100 PW Class Lasers” was held from July 22 to July 28, 2017, as part of the International Symposium "Topical Problems of Nonlinear Wave Physics" (NWP-2017) on board the river ship cruising from Moscow to St.Petersburg. 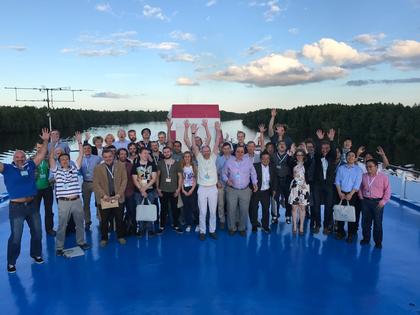 The scope of the workshop covered, but was not limited to, the following topics:

- Physics of petawatt and multi-petawatt lasers

The format of the symposium gave the participants a brilliant opportunity to attend not only the sessions devoted to the key technological issues of the PW class lasers but also to other, interrelated fields and establish scientific links with representatives of quite a few international research centers.

A similar effort was made during a special session focusing specifically on scientific cooperation with the Russian project XCELS (Exawatt Center for Extreme Light Studies) in the field of high power laser research which was held during the fifteenth meeting of the International Symposium on Ultra-Fast Intense Laser Science (ISUILS 15) series in Cassis, France during October 2nd - 7th, 2016.